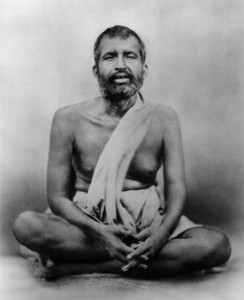 Sri Ramakrishna (February 18, 1836 – August 16, 1886), born Gadadhar Chattopadhyay, was a famous mystic of 19th-century India. His religious school of thought led to the formation of the Ramakrishna Mission by his chief disciple Swami Vivekananda – both were influential figures in the Bengali Renaissance as well as the Hindu renaissance during the 19th and 20th centuries. Many of his disciples and devotees believe he was an avatar or incarnation of God. He is also referred as “Paramahamsa” by his devotees, meaning “Great Swan”.

Ramakrishna was born in a poor Brahmin Vaishnava family in rural Bengal. He became a priest of the Dakshineswar Kali Temple, dedicated to the goddess Kali, which had the influence of the main strands of Bengali bhakti tradition. His first spiritual teacher was an ascetic woman skilled in Tantra and Vaishnava bhakti. Later an Advaita Vedantin ascetic taught him non-dual meditation, and according to Sri Ramakrishna, he experienced nirvikalpa samadhi under his guidance. Ramakrishna also experimented with other religions, notably Islam and Christianity, and said that they all lead to the same God. Though conventionally uneducated, he attracted the attention of the middle class and numerous Bengali intellectuals.

Sri Ramakrishna, who was born in 1836 and passed away in 1886, represents the very core of the spiritual realizations of the seers and sages of India. His whole life was literally an uninterrupted contemplation of God. He reached a depth of God-consciousness that transcends all time and place and has a universal appeal. Seekers of God of all religions feel irresistibly drawn to his life and teachings. Sri Ramakrishna, as a silent force, influences the spiritual thought currents of our time. He is a figure of recent history and his life and teachings have not yet been obscured by loving legends and doubtful myths.

Through his God-intoxicated life Sri Ramakrishna proved that the revelation of God takes place at all times and that God-realization is not the monopoly of any particular age, country, or people. In him, deepest spirituality and broadest catholicity stood side by side. The God-man of nineteenth-century India did not found any cult, nor did he show a new path to salvation. His message was his God-consciousness. When God-consciousness falls short, traditions become dogmatic and oppressive and religious teachings lose their transforming power. At a time when the very foundation of religion, faith in God, was crumbling under the relentless blows of materialism and skepticism, Sri Ramakrishna, through his burning spiritual realizations, demonstrated beyond doubt the reality of God and the validity of the time-honored teachings of all the prophets and saviors of the past, and thus restored the falling edifice of religion on a secure foundation.

Drawn by the magnetism of Sri Ramakrishna’s divine personality, people flocked to him from far and near — men and women, young and old, philosophers and theologians, philanthropists and humanists, atheists and agnostics, Hindus and Brahmos, Christians and Muslims, seekers of truth of all races, creeds and castes. His small room in the Dakshineswar temple garden on the outskirts of the city of Calcutta became a veritable parliament of religions. Everyone who came to him felt uplifted by his profound God-consciousness, boundless love, and universal outlook. Each seeker saw in him the highest manifestation of his own ideal. By coming near him the impure became pure, the pure became purer, and the sinner was transformed into a saint.

The greatest contribution of Sri Ramakrishna to the modern world is his message of the harmony of religions. To Sri Ramakrishna all religions are the revelation of God in His diverse aspects to satisfy the manifold demands of human minds. Like different photographs of a building taken from different angles, different religions give us the pictures of one truth from different standpoints. They are not contradictory but complementary. Sri Ramakrishna faithfully practiced the spiritual disciplines of different religions and came to the realization that all of them lead to the same goal. Thus he declared, “As many faiths, so many paths.” The paths vary, but the goal remains the same. Harmony of religions is not uniformity; it is unity in diversity. It is not a fusion of religions, but a fellowship of religions based on their common goal—communion with God. This harmony is to be realized by deepening our individual God-consciousness. In the present-day world, threatened by nuclear war and torn by religious intolerance, Sri Ramakrishna’s message of harmony gives us hope and shows the way. May his life and teachings ever inspire us.