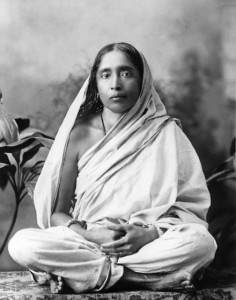 Sri Sarada Devi was born in Jayrambati, a small village in Bengal, India. At the age of five she was betrothed to Sri Ramakrishna, whom she joined at Dakshineswar when she was in her late teens. According to her traditional biographers, both lived lives of unbroken continence, showing the ideals of a householder and of the monastic ways of life. After Sri Ramakrishna’s death, Sri Sarada Devi stayed most of the time either at Jayrambati or at the Udbodhan office, Calcutta. The disciples of Ramakrishna regarded her as their own mother, and after their guru’s passing looked to her for advice and encouragement. The followers of the Ramakrishna movement regard Sri Sarada Devi as an incarnation of the Divine Mother.

“When Holy Mother came to Dakshineswar at the age of sixteen, Sri Ramakrishna asked her whether she had come to pull him down to a worldly life. Without hesitation she said, “No, I am here to help you realize your Chosen Ideal.” From then on, Holy Mother lived with Sri Ramakrishna as his spiritual companion, devoted wife, disciple, and always the nun. She was the embodiment of purity. Her mind was never sullied by the faintest breath of worldliness, though she lived with Sri Ramakrishna for the greater part of fourteen years. She never missed communion with God, whom she described as lying in the palm of her hand, though she was engaged day and night in various activities.

“Holy Mother was an unusual awakener of souls. With her disciples she served as teacher, dissolving their doubts, as mother, who through love and compassion won their hearts, and as the Divinity, who assured them of liberation. Herself nearly illiterate, through simple words she taught them the most profound truths. Her affectionate maternal love tamed their rebellious spirits; but her great power lay in her solicitude for all. Often she said, “I am the Mother, who will look after them if not I ?” She encouraged them when they were depressed because of slow spiritual progress, and she took upon herself their sins and iniquities, suffering on that account.

“Holy Mother was conscious of her divine nature, but she rarely expressed this awareness. For many years Sri Ramakrishna practiced great austerities and formally renounced the world, but Holy Mother lived as a simple householder, surrounded by quarrelsome and greedy relatives. As a teacher she taught the realization of God alone is real, and everything else, impermanent. The human body so treasured by most people, survives cremations as only three pounds of ashes. Holy Mother — humility itself — claimed that she was in no way different from other devotees of the Master. Her disciples felt awed and uplifted when she blessed them by touching their head with the same hand which had touched the feet of God. She was fully aware of her disciples’ present limitations and their future possibilities. No one went away from her with a downcast heart.

“The outstanding virtues of Indian womanhood are courage, serenity, self-control, sweetness, compassion, wisdom, and an intuitive relationship with God. Holy Mother possessed all these virtues. Since the acquisition of such gifts is the dream of all women, Holy Mother may aptly be seen as the symbol of aspiration of women everywhere.”